Hotel Balzac is delighted to announce that it has received the TripAdvisor 2016 Certificate of Excellence. It is the sixth consecutive year the five-star hotel in Paris has been awarded this coveted accolade, which is based entirely on the feedback received on the world’s largest travel site. We would like to take this opportunity to thank every guest who has taken the time to review their experience of our hotel and the first-class service we strive to offer. 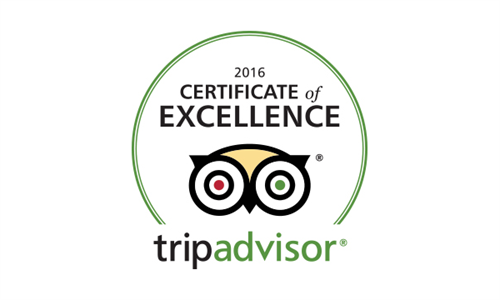 The Certificate of Excellence has become a key indicator in our industry that the awarded business consistently delivers a high level of service, resulting in excellent reviews. It is a great honour to have received such an internationally respected award that’s based entirely on the satisfaction of our guests and reflects the dedication of our team in providing the perfect five-star stay in Paris.

To receive the award, TripAdvisor judges each accommodation, restaurant and attraction on the quality and quantity of reviews guests have written, as well as how recent they’re posted within the 12-month period. With over 300 reviews to date and an average rating of four out of five, we’re pleased that so many guests have felt inspired to share their experiences. Recent feedback has included a description of the hotel as ‘a wonderful Parisian paradise’, and the staff as ‘…incredibly kind, efficient, knowledgeable, and committed to making our stay memorable’.

Over 350 million unique visitors use TripAdvisor every month to leave feedback or plan a seamless getaway that’s unforgettable for all the right reasons. Its global audience leave an average of 200 new contributions, from written reviews to first-hand photos, every minute, which means anyone hoping to book the very best holiday experiences possible can trust that they’re getting detailed and unbiased points of view.

We pride ourselves in the five-star experience we offer at Hotel Balzac. Each of our 13 suites and 56 rooms combine luxurious fabrics and elegant decors with contemporary comforts such as LCD television, cable TV and complimentary Wi-Fi. Some even boast breath-taking views over the Parisian skyline to the Eiffel Tower from private terraces. Guests can also look forward to the golden-key concierge service, valet parking and fine-dining at Pierre Gagnaire’s three Michelin-Starred flagship restaurant, located within the hotel.

We would once again like to thank every guest who has taken the time to review their stay at our hotel. This year’s award follows our invitation to be included in TripAdvisor’s exclusive Hall of Fame in 2015, which was due to having consecutively received the Certificate of Excellence for the five years following its introduction in 2011. As a team, we are very proud to have received such positive and complementary feedback year-after-year and will work hard to continue to deliver such an outstanding level of service. If you’re thinking of visiting Paris, take a look at our latest reviews here and put our skills to the test by booking a five-star stay at Hotel Balzac.

The five-star Hotel Balzac reopened its doors to guests and diners for the first time since April. The short closure has allowed the hotel to adopt new industry standards brought about by COVID-19, and prepare a safe, luxury environment to welcome its customers back to Paris.

Hotel Balzac has been nominated as France’s Leading Boutique Hotel at the World Travel Awards. Vote for us on the below link.