Hotel Balzac Welcomed into the TripAdvisor Hall of Fame

Hotel Balzac is thrilled to announce that it has been welcomed into TripAdvisor's Hall of Fame after being awarded the 2015 Certificate of Excellence. Our entire team would like to thank every guest who has taken the time to review their experience of our five-star facilities. 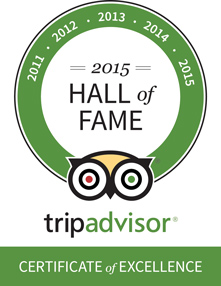 To be awarded a 2015 Certificate of Excellence is an honour and great reflection on our hard work to deliver an exceptional five-star stay in Paris. TripAdvisor only awards businesses that have received consistently high levels of great feedback, indicating that those that have won this accolade are highly dependable when it comes to delivering an impressive level of service. As Hotel Balzac has received the Certificate of Excellence for the fifth year in a row, TripAdvisor has also invited us into its exclusive Hall of Fame.

TripAdvisor has grown to become the largest travel website in the world, offering the chance to read and contribute to the millions of first-hand reviews. It provides personal insight into what experience you can expect from a business, whether you’re searching for the finest cuisine, the top attraction or the perfect place to rest your head after a long day spent discovering a new city.

Though the site launched in 2000, Certificates of Excellence were not introduced until 2011, making this year the award’s fifth anniversary. To celebrate, TripAdvisor has launched a Hall of Fame, welcoming in only those businesses that have received a Certificate of Excellence every year throughout this time. Just 9% of this year’s certificate winners were included in this elite club, signifying how truly exceptional a luxury stay at Hotel Balzac in Paris really is.

Our central location is ideal for exploring the many beautiful sights and sounds of Paris, situated a mere one minute walk from the world-famous shopping boulevard Champs-Élysées. Each of our 56 rooms and 13 stunning suites will provide a luxurious base, some with views of the Eiffel Tower, while there's also a chance to sample 3 Michelin Starred cuisine at our Pierre Gagnaire restaurant. Though the hotel’s grand 19th century architecture harks back to a time when it was home to renowned writer Honoré de Balzac, the refined surroundings also offer a range of state-of-the-art modern comforts, ensuring a relaxing and luxurious Parisian stay.

We value all the feedback we receive and would once again like to thank every guest who has written a review. The award of 2015 Certificate of Excellence and subsequent welcome into the TripAdvisor Hall of Fame demonstrates Hotel Balzac’s ability to offer an outstanding five-star stay in Paris. Why not test our service skills for yourself by booking a city break at the award-winning Hotel Balzac now?

The five-star Hotel Balzac reopened its doors to guests and diners for the first time since April. The short closure has allowed the hotel to adopt new industry standards brought about by COVID-19, and prepare a safe, luxury environment to welcome its customers back to Paris.

Hotel Balzac has been nominated as France’s Leading Boutique Hotel at the World Travel Awards. Vote for us on the below link.